1.0 FUNCTION OF THIS DOCUMENT

In this document, the term “major facility” refers to buildings, building additions, roads, and significant open spaces. The term “minor facility” refers to spaces that are within major facilities. The guidelines in this document do not apply to the naming of scholarships, fellowships, professorships, colleges, departments, programs, centers, institutes, and other similar or like naming opportunities.

The primary criteria for naming a major or minor facility after an individual, group of individuals, or organizations shall include but not be limited to:

The University reserves the right to refuse a naming request or to reverse a naming decision should the individual, group of individuals, or organizations after which the building is named or is to be named, be shown to have rejected values that preserve human dignity and/or the educational ideals of the University, or in the case of a facility named after a donor, failure to fulfill the terms of the gift use agreement.

Major facilities will be assigned temporary names to indicate function until a permanent name is assigned (see 4.3).

Named colleges, departments, programs, centers, institutes, and other similar or like naming opportunities, may be housed in facilities that are also named. In this case, the assigned name of the building will appear on the building face and external sign, with named programs indicated as dictated by signage standards of the University’s Facilities Services, Capital unit.

The name on a facility to be destroyed by casualty, demolished, vacated, sold, or replaced will not automatically be transferred to a new facility. In such cases, a request must be submitted in order to recommend a name for the replacement facility.

If a building has been renovated and/or repurposed, the building may be renamed.

Any request to rename, add, or remove a name from a facility should include documentation pertaining to the original naming, if available, and subsequent name change proposal. If it is proposed that a facility be renamed, a second name be added, or name be removed, WSU representatives will inform, in advance, the original donor or honoree and/or their immediate family, if possible. Naming rights will not usually extend beyond the normal life of the building. There may be recognition of earlier donors or honorees in an appropriate location.

Exceptions to this policy must be approved by the President and the Regents of Washington State University.

4.0 PROCEDURE FOR REQUESTING A NAMED FACILITY

All facility naming requests should be directed to the Chair of the University Facilities Names Committee and include the following:

Facility naming requests that are primarily in response to major financial contributions from donors (see 3.1 and 3.2) should be directed to the Facilities Names Committee accompanied by an endorsement from the Vice President for Advancement or designee, in consultation with the President as appropriate. No discussion with prospective donors should occur without prior review and agreement of the Vice President for University Advancement and the University President.

Requests to assign a temporary name to a facility should be forwarded to the Facilities Names Committee when a new building is funded for design or when an existing building with a functional name is assigned a new function:

Upon receiving a naming request, within 30 days the Chair of the Facilities Names Committee will convene the committee to consider the request, and the committee will make a recommendation to the President. Special requests that require a quick response may be handled by the committee between standing meetings via conference call or other electronic communication.

When the Facilities Names Committee recommends a name for a minor facility, the committee’s recommendation will include: the proposed full name of the facility and a proposed Registrar’s Code if appropriate. This information is forwarded to the President who makes the decision. Formal acknowledgement of the President’s decision will be sent by the President’s Office to the FNC Chair, with copies to the original requester, appropriate Vice President and Dean (if applicable), and the Offices of Facilities Services, Capital and Finance and Administration.

When the Facilities Names Committee recommends a name for a major facility, the committee’s recommendation will include the proposed full name, proposed signage, and proposed Registrar’s code as is appropriate. This information is forwarded to the President who decides whether to accept the recommendation.

Formal acknowledgment of action on a naming recommendation that is forwarded to the Regents will be made in the minutes of a Regents Meeting. The President’s Office will acknowledge this action with a letter to the Chair of the Facilities Names Committee, with copies to the original requester, the appropriate Vice President and Dean (if applicable), and the Offices of Facilities Services, Capital and Finance and Administration.

Implementation of the naming recommendation shall be carried out through the Office of the President in consultation with the Offices of Facilities Services, Capital, Finance and Administration, and the WSU Foundation. 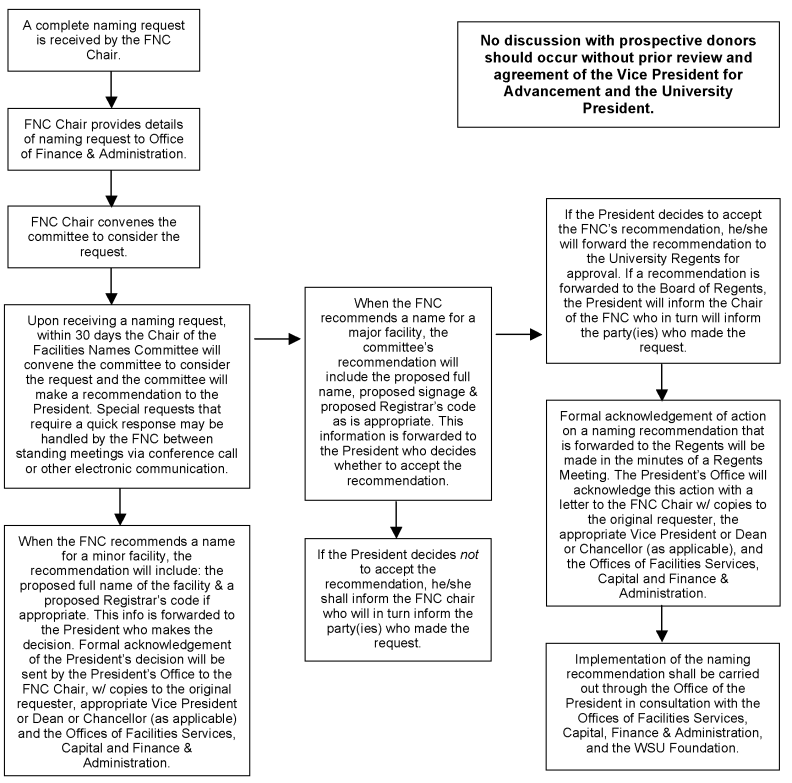